Neither age nor occupation are barriers in your writing life. 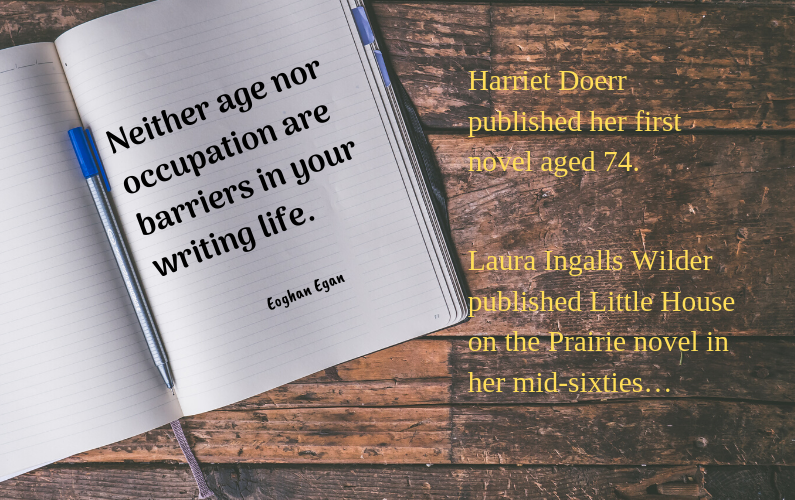 In fact, age is an advantage; it allows the writer to build up a bank of experience. Harriet Doerr published her first novel aged 74, and Laura Ingalls Wilder published Little House on the Prairie in her mid-sixties.

Children’s author Mary Alice Fontenot wrote her first Clovis Crawfish book aged 51. Over the next twenty-nine years she added a handful of books to the series, and in 1990, now aged 80, Mary Alice got serious, and published nearly a dozen further Clovis Clawfish titles before her death in 2003.

Kenneth Grahame, born in 1859, waited until he’d retired from his Bank of England job in 1908, to publish The Wind in the Willows.

Richard Adams’s bestseller Watership Down was published when he was in his fifties.

Raymond Chandler had his first short story published when he was 45, and his first novel, The Big Sleep at 51.

Go Set a Watchman by Harper Lee was written in the 1950s, and published in 2015 when she was in her eighties.

Nirad C. Chaudhuri wrote The Autobiography of an Unknown Indian at the age of 54. He wrote a sequel, Thy Hand, Great Anarch! When he was 90 and published Three Horsemen of the New Apocalypse, aged 100.

Jobs Famous Writers Had Before They Became Best-selling Authors

Stephen King was a janitor.

John Green (The Fault in our Stars) wanted to become a priest and was a student chaplain in a children’s hospital. His experience there moved him to become an author instead.

Science fiction writer, Octavia Butler, used to get up at 2 a.m. and write until it was time to go to work in her job as a potato chip inspector.

Agatha Christie was an apothecaries’ assistant. (Hah! So that’s how she learned so much about poisons).

Robert Frost was a light-bulb-filament replacer in a factory.

While waiting to publish his short story collection, Dubliners, an impoverished James Joyce sang and played the piano. Joyce was an accomplished tenor – and he needed to be. It took nine years before Dubliners was finally published in 1914. But, he wasn’t singing all the time. During that period, he completed A Portrait of the Artist as a Young Man and began the initial drafts of Ulysses. (You don’t need me to spell out the moral of this story).

J.D. Salinger was entertainment director on a Swedish luxury liner.

Raymond Carver worked alongside his father in a sawmill.

John Grisham worked at a nursery.

John Steinbeck worked as a tour guide at a fish hatchery.

Maya Angelou was a nightclub singer.

John Lescroart was a bartender and a singer-songwriter.

To supplement his income, Ken Kesey was a willing participant in CIA brainwashing trials that explored how they could control someone under the influence of psychedelic drugs. That experience, coupled with work in a mental hospital, gave him the material to write One Flew Over the Cuckoo’s Nest.

T.S. Eliot was a bank clerk.