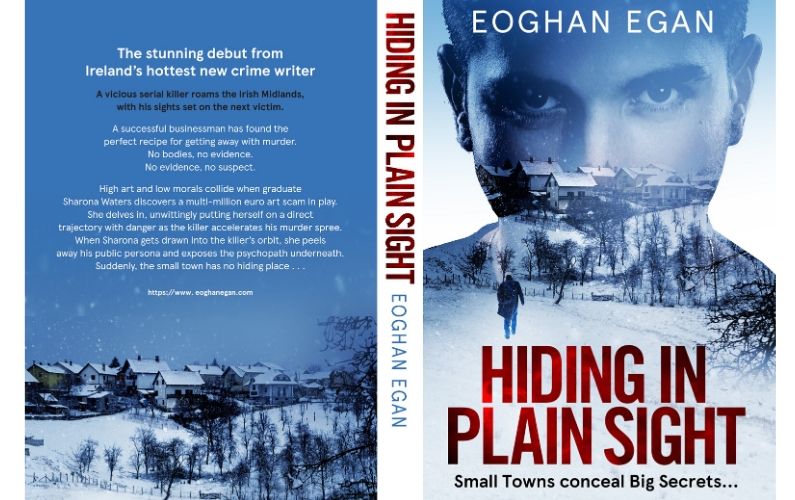 He compressed a tennis ball, gazed out of the corner office window, and watched another heavy snow shower blanket the space between Tullamore’s O’Carroll Street and Market Square. Snow was a natural enemy; it meant tracks and traces. But with more prolonged showers forecast for tonight, it would hide footprints and allow him to slip away unseen.

He’d noticed her at a gallery three weeks earlier and sidled close enough to breathe in her scent and learn the basics: a single mother and artist, employed part-time in a café, struggling to stretch her income.

He overheard her ask where she could find a copy of a particular book, and later, he smelled her insecurity as she paused at a display and gave him a quick smile. No conversation. No phone number exchange. No swapped business cards. He’d taken the volume Roberta wanted from his library and kept it in his briefcase—an alibi, if needed.

He sat back and closed his eyes.
Yes. In a few hours, Roberta Lord will die.
He willed his body to trigger the intense hormonal surge that swelled and gushed like waves, followed by blessed peace of mind, and …
A desk phone buzz interrupted his reverie. He stabbed a button on the console. ‘Yes?’
‘Mrs Wilson’s downstairs.’
‘Get someone else to deal with her.’
‘She specifically—’
‘Ambrose, perhaps?’
‘—asked for you. Won’t talk to anyone else.’

Face muscles bunching, wishing he could throttle this new secretary, the art dealer glared at a digital desk clock as it blinked 2:49. ‘Be right there,’ he said.
Ten minutes. Have to be out of here in ten minutes.

He pressed an external line and dialled a local garage. ‘My car is due a service,’ he told the receptionist.
‘Of course. What day—?
‘Now.’
‘I’ll transfer—’
‘Twenty minutes. Have a replacement ready.’

The art dealer dropped the receiver, shoved the tennis ball into a pocket, grabbed his briefcase and marched out. At the lift, he pressed the call button, lips curling in distaste when he saw the secretary totter towards him, teetering in tangerine high-heel courts. She gestured at the folder in her hand.
‘I’ve typed and printed the file, sir.’ The art dealer stared at her and the secretary blushed, wary now. ‘The one you said was urgent. Will I leave—?’
‘I’ll take it.’ The art dealer punched the lift button again, riffled through the pages, and scowled at a typo on page three. He gave up on the lift, pushed through an exit door and bounded downstairs. On the ground floor, he dumped the folder into a rubbish bin, patted down his hair, switched the scowl to a choirboy’s smile and walked into the reception area, hand outstretched. ‘Christine. So wonderful to see you again.’ The handshake was warm and firm. The art dealer placed his hand on the woman’s elbow and guided her towards a viewing room. ‘Now—’ his voice settling like smoke around the visitor ‘—prepare to be impressed…’

Twenty-two minutes later, across town in Kilcruttin Business Park, the man exchanged keys with a garage mechanic, made sure all lights and taillights worked …
Faulty brake lights. That’s how others got caught.
… and settled into a Toyota Avensis. He nosed the car onto the N52, passed by Charleville demesne, through Kilcormac village and signalled left after Fivealley.

The car jounced along a narrow pot-holed lane and he glanced in at the empty farmhouse. When the road petered out, he stopped, opened a field gate and inched the car up a gravel road that gave access to farm sheds. Eastwards, dark cloudbanks hovered over Stillbrook Hill and Wolftrap Mountain, presaging more snow.

In a toolshed, he slipped into wellingtons, donned a hooded raincoat, pulled on a pair of latex gloves, and cased the Toyota boot with a piece of old black tarpaulin used to wrap silage bales.

Housed cattle stuck their heads under feed bars, lowing in expectation. From a toolbox, he removed a wooden mallet and a steel-handled claw hammer with a rubber grip. He hefted each, judged weight and balance, decided on the mallet and put it in the briefcase alongside a new pair of rubber gloves.

From a shelf, he selected a tin of black paint and an artist’s rigger brush. Eight strokes changed the registration numbers from 10340 to 18848. He stepped away, inspected his handiwork …
Fine.
Dabbed on a small alteration …
Better.
… and placed a bottle of turpentine and a cloth on a shelf. He’d need them later.

He left his mobile phone beside them, tore off the gloves, shoved them into an old fertiliser bag, and glanced around once more. In a tin box, he found a rusted Stanley blade and placed it in the car’s ashtray. A trickle of anticipation snaked up his spine. ‘Number seven,’ he murmured. ‘Your time is up.’

The art dealer retraced the route back to Tullamore, skirted the town and continued towards Kilbeggan. A quick glance at his wristwatch.
16:34.
To the left, spotlights cast a shadow on the big house stitched into a glade on Hattinger’s estate. He hadn’t set foot inside since marrying into the family. Linking up with the M6 motorway, he headed west amid a convoy of commuters.
16:41.
He needed to be in position by five-fifteen.

Pillow drifts reduced the motorway to a single lane. The procession of vehicles slowed his progress; he’d have to risk a shortcut rather than take the more circuitous route.

Westwards, the orange glow of Ganestown’s lights appeared tantalisingly close, before another snow squall, thick as duck down, obliterated the view.

A “Traffic Diverted” sign caused a holdup. The man growled in frustration. He took out the tennis ball, squeezed it tight, ignoring the darts of pain that coiled and dug like strands of barbed wire around his brain, and glowered at the silent council machines barricaded behind traffic cones. Further repairs of the road surface, chewed away by weeks of Arctic ice and frost, would have to wait.

He inched by, fury simmering …
16:58.
… gritted his teeth, and mind-mapped the quickest route to Oak View Lane.
If I turn left—

A van in front stopped. The art dealer jammed on the brake, skidded along the ice-crusted surface, his arms and body tensed, expecting an impact. He felt the pump-pump action in the pedal as the ABS system kicked in, tyres struggling for grip, and stopped centimetres away from a collision. Through narrowed eyes, he stared at a portable traffic light and willed it to turn green.

It took eighteen minutes to find Oak View Lane, the cul-de-sac where Roberta Lord lived. The art dealer navigated into the dead-end, where a lone streetlight cast shadows in the gloom. Roberta’s house was still dark. He steered around a snow-covered car, halted three-quarter ways around a traffic circle, cut the lights, set the wipers to intermittent, and stared through a fresh flurry of billowing snowflakes.

Then, with the patience of a spider, he settled in to wait.

If you enjoyed this excerpt then you’ll love what comes next… Click below to order the full book on Amazon.