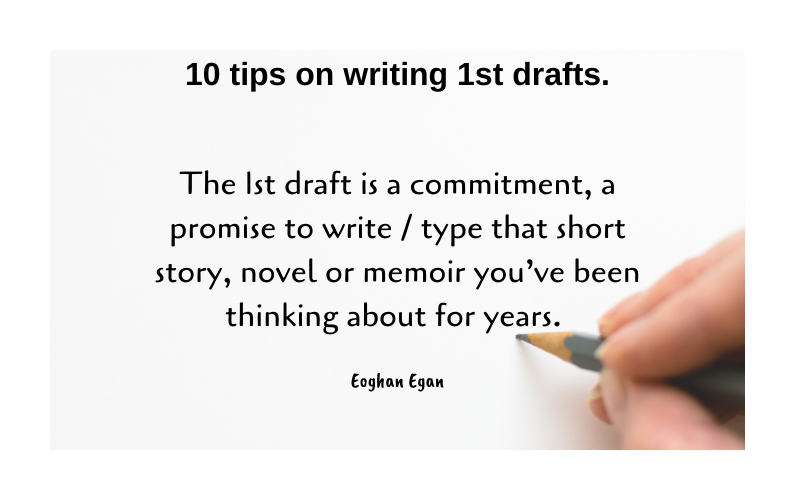 The 1st draft is a commitment, a promise to write/type that short story/novel/memoir you’ve been thinking about for years. It’s the first of many steps and by far the most important. Tell your family and friends what you’ve decided. Yes, in six months they’ll annoy you by asking: “how’s that novel coming on?” however, by putting the words out there, it adds credence and conviction to your pledge.

I. A writing habit. Consistency is the vital element, the magic potion that’ll determine to what degree you’ll excel at completing the 1st draft. You must find a way to put in the time. Focus on writing for an hour or two every day; early mornings, late nights, whatever works best. Commit and stick to it for six weeks. At times you may find it a bitter pill to swallow, but the body of work you’ll produce will amaze you.

II. Start with whatever scene is in your head. It may end up as a section in the middle of the novel, or get deleted in a future edit, but no matter, that’s where to begin.

III. A famous author calls his 1st drafts, zero drafts – they’re not worthy of being called 1st drafts, but the idea in his head has now got transposed to a laptop, and there’s a basic structure for him to work on.

IV. I compare the writing process to assembling a jigsaw:
Remember dumping all the jigsaw pieces on a table or floor and turned them face up, separating and collecting the edge bits as you went along? That starting point is the ideas swirling around your brain. Then you made the outer frame by joining the edge bits together. That’s your first draft, a skeletal outline that has a shape. You’ll flesh it out in time.

V. Some people have a different way of fitting the jigsaw pieces together. They start by turning the bits face up and then separate them into little piles. The sky, for example, you’ll need those bits next week. Or maybe there’s a shed with a red roof in the bottom right-hand corner of the picture, and they gather all the red pieces…
That’s similar to outlining scene-by-scene. Outlining is excellent if you know the questions to ask and can answer them, but there’s no wrong way. Do whatever feels right. Set nothing in concrete; ideas change during the process.

VI. Staying with the jigsaw analogy… when you scatter the pieces around the table or floor, they take up a lot of space – ten times more than the finished product will, but you need that room to allow yourself a helicopter view.
The same thing applies as you get into your story: new ideas and character form. You’ll start jotting words and half sentences on pieces of paper, or post it’s. Ideally, you’ll have a wall or pegboard where these ideas can get tacked or stuck.
If you don’t have space, all’s not lost. Most laptops have various folders where you can keep notes, and there are apps dedicated to helping you outline, collate and save your material.
If you work longhand, then start your manuscript on the first page of the notepad, and as new thoughts form, jot them down on the back page.

VII. Stop focusing on word counts. No, you don’t need to write 1200 words per day. Some night’s I’ve written fifty words. Other times, two thousand, depending on where you are in the story. Write something. Move the story on. It’s all about habit.

VIII. Don’t get hung up on physical descriptions, voice or character arc… plenty of time to fix all that next month. Think about your overall vision and nail that story down.

IX. My 1st draft (s) were a chaotic mishmash as I grappled with the location and characters. I had the characters, but I struggled to find my writing voice and the novel setting. Early drafts were set in the US and UK, and I wasn’t comfortable with either location. But when I moved the story to the Irish Midlands, it felt right. Those initial dead-ends turned out to be a Godsend. I learned so much about the characters as I shifted them around the globe.

X. When you’re not writing, you’ll find your mind drifting to your manuscript. Words and sentences will float through your brain, or someone will say something that triggers a thought. These stray nuggets are pure gold. Scribble them down. No, you won’t remember. Write a note or text them to yourself. You’ll thank me later.

If you want everything in life to align, and expect total clarity and inspiration to strike before beginning, you could have a long wait. So, what’s holding you back? I know you’ve got a hectic schedule, but if you want something done, ask a busy person. Start today. Use whatever tools you’ve got. This time next year, you’ll be glad you did.
Like the jigsaw, 1st drafts are backbreaking hard work but ultimately satisfying when you view the completed product. New ideas will make you rethink sections of your manuscript. Characters will get deleted; others will appear. The writing will need shaping, the holes in the storylines are problematic, but congratulations and well done. This rough diamond is your completed 1st draft.

We use cookies to ensure that we give you the best experience on our website. If you continue to use this site we will assume that you are happy with it.OkPrivacy Policy