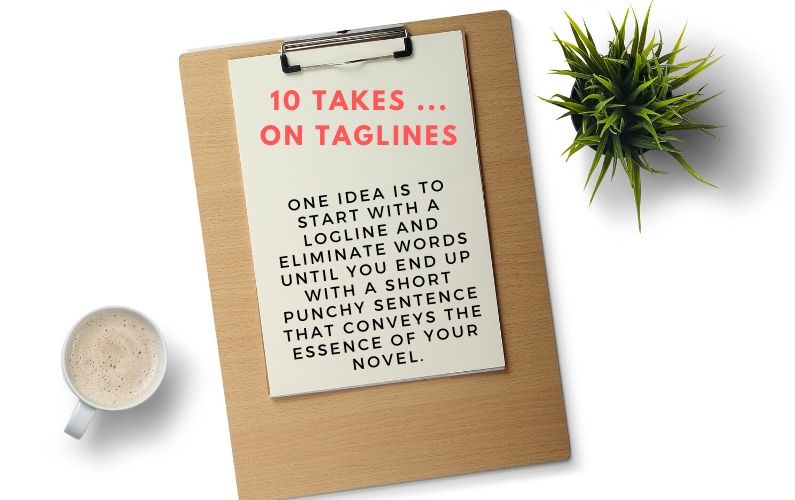 Tag lines, tags and attention grabbers are U.S. terms for taglines. In the UK, end line, shout line and strapline are also used. Pay-off is the Italian label for tagline. Belgians call a tagline a baseline, and the French refers to taglines as signatures.

A tagline is a teaser; a short snappy sentence that captures the nub of your book. Its job is to supplement the book cover by adding intrigue and persuade readers to read the blurb or first paragraph.

The word, originally a nautical term, got used, I believe, in the film industry back in the day when studios had scripts stacked in vaults. A succinct one line summary of its contents got written on the side of each file, which served as a navigational tool and negated the need to dislodge piles of scripts while searching.

A logline is a one-sentence synopsis that captures the main character, the conflicts and the stakes.

Other differences between Taglines and Loglines

Taglines vary between 6-12 words. Loglines are 1-2 sentences in length.

Jaws Tagline: Don’t go in the water.
Jaws Logline: Private feuds take second place during a relentless duel between man and beast, as a sheriff fights to protect a beach community after a deadly shark attack.

Alien Tagline: In space, no one can hear you scream.
Alien Logline: When the crew of a space merchant vessel responds to a distress signal, one of their members is attacked by a mysterious extra-terrestrial, whose life cycle has just begun.

Some authors don’t use taglines, but if you decide to create one …

To get you started, I’ve included a handful of my favorite crime fiction taglines. (Note: none are over 12 words).

“A Missing Child. No Explanations. No Ransom Demands. No Hope.” Finders Keepers by Belinda Bauer.

“She Knew Everything About Him … But the Truth.” Unravelling Oliver by Liz Nugent.

“Could You Murder Your Wife To Save Your Daughter?” Her Last Tomorrow by Adam Croft.

“There’s a Body in the Water – and She’s Wearing Your Clothes.” The Evil Beneath by A. J. Waines.

“When The Targets Are Random … You Could Be Next.” Rogue Killer by Leigh Russell.

“A House Full of Secrets. A Life Full of Lies.” Let the Dead Speak by Jane Casey.

“You Trust Him. So Why Are You So Scared?” The Innocent Wife by Amy Lloyd.

“This Time There Are No Rules.” A Deadly Trade by Eve Seymour.

“The Bad Man is Everywhere … But Can You See Him?” Red Ribbons by Louise Phillips.